Professional catamaran designer Kurt Hughes was so intrigued by the Apollo Missions, that he designed a tiny house based on the lunar lander.

Architectural Digest paid him a visit at his base on the banks of the Columbia River in Beverly, Washington, 50 miles from where the astronauts trained for their lunar missions.

What they found is an impressive fete of engineering; a practical and unique space age tiny dwelling house that sure grabs everyone’s attention. From the outside, the structure looks too small for any kind of living space, but everything changes once you get inside.

Kurt has been a builder all his life, building a dome at the age of 21 and a sailboat a few years later.

When tiny houses started gaining popularity, he says he immediately saw several problems. They were heavy and structuraly weak.

Being a catamaran designer, Kurt thought he could apply his skills and knowledge in coming up with a tiny house that was neither of these two things.

The first thing he did was design the house in different modules, based on available records from the lunar lander. He then glued the patterns together using epoxy.

Kurt wanted an open space inside his tiny house, and he designed it exactly that way.

There is plenty of natural light too, with almost the entire top of the unit made of plexiglass panels.

The house has a small bathroom that comes with a Japanese style wall hung toilet, and a glass enclosed shower.

There is also a beautiful and functional kitchen that comes with everything you would expect; microwave, refrigerator, induction cooker and a standard sink. The counter top is made of carbon fiber.

Kurt included a deck on his lunar lander, something the original did not have for obvious reasons.

The bedroom is downstairs, with wrestling-mat-style floor that cushions you incase of a fall.

The lunar lander is supported by 3 legs (the original had 4), screwed onto concrete pads. There are also hold-down cables to provide the 1-ton structure with extra stability.

You can watch the full tour of the lunar lander below. 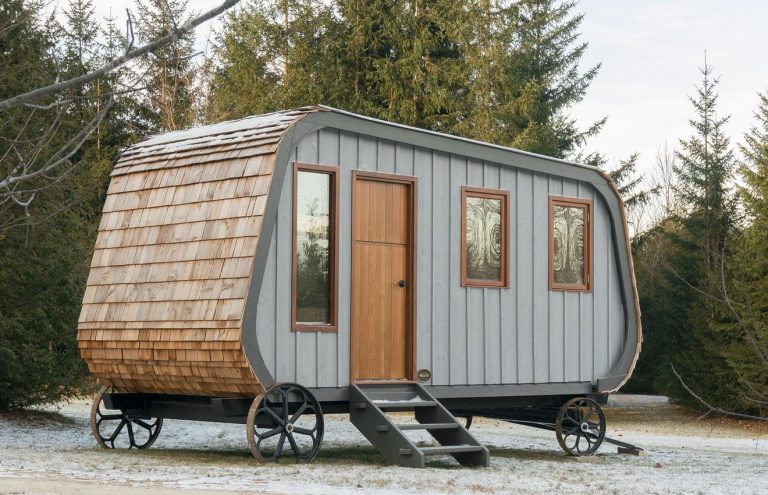