A house without security cannot be home. Tiny houses are very popular and as the influence keeps growing, many can’t help but question their security and safety. With severe climatic changes making the news, safety against storms is a huge concern.

Tiny houses can be just as safe as other houses during storms if certain measures are put in place eg. the windows and doors need to be secured well, not just for safety but also for insurance purposes.

As a precaution measure though, it is important to build a tiny house in an area that doesn’t experience frequent storms.

Types of storms that cause damage to a Tiny House

Heavy rains cause the most damage compared to any other storm. Flooding caused by heavy rains causes damage on both big homes and tiny houses alike. Flooding in itself is damaging but the havoc it causes can be felt years later. Some of the problems experienced include electrical damage, mould, water damage, wood damage and heavy debris.

When building a tiny house, where you position it relative to the topography matters a lot. For instance, having it on a hill top may help prevent flooding. If this option is not available, perhaps raising it a bit from the ground level can help too.

Hurricanes are one of the most damaging storms, and as much as possible, tiny houses should not be built in a hurricane-prone area. They are accompanied by heavy rains, strong winds and flooding. Hurricanes are known for causing damage to large buildings so tiny houses are no exception. For owners with a tiny house on wheels, they can easily move them in case of a hurricane. The damage caused by hurricanes includes broken windows and doors, damaged roof and exterior walls, flooding and long term erosion.

A tornado is a mobile and violent rotating strong wind that has the appearance of a funnel-shaped cloud. Tornadoes are very frequent in the central USA so that is not a good area to build a tiny house. Tornadoes are usually associated with only strong winds so most of the damage is usually experienced by floating debris. The tiny house should be built in a way to be able to withstand the strong winds. Some owners of tiny houses feel safe staying and weathering the tornado. Most of the damage is experienced on the roof, house structure and broken windows.

As long as the foundation is strong enough, a tiny home can handle such weather just as well as any other house.

Many people choose to weatherproof their houses instead of moving away. For a tiny house, this shouldn’t be problematic since it is less expensive. The measures that can help secure a tiny house during a storm include:

Windows are often the very areas that experience first-hand damage during a storm by breaking. To ensure safety, windows can be reinforced with plywood before the storm. With the use of plywood, they are less likely to break or shatter during a storm. Tiny houses should be built with hurricane and earthquake tie-downs.

Storms usually hit power lines causing power outage. Since many tiny houses are off-grid, this may not be a problem for most. However, those without generators or solar should ensure they purchase cords and other appliances that are weatherproof.

Going off-grid also requires some weatherproofing, eg. solar panels should be properly grounded. Failure to do so, the storm could cause serious damage including electric shock and fires.

Heavy storms come with heavy snow and below zero temperatures. The best way to protect a tiny house against cold temperatures is by insulating. A tiny house should be insulated during the construction stage to avoid extra expenses later. Heavy-Duty Spray foam should be used for houses built in a snowy place. Foam is able to cover the house thus keeping the heat in and cold out.

House utilities and equipment should be stored away in cabinets. Chairs, tables and toys should also be put far from the windows. Cables should be disconnected from devices in case the storm starts blowing at the house. Double-check on jacks, screws, bolts and steel legs that are meant to support the house in case of heavy storms to ensure they are stable.

Insurance is one of the best ways to ensure that the damage caused by severe weather does not have major implications. Before tiny houses became popular, there weren’t many insurance companies willing to cover this kind of structures. However as the trend caught on, more and more insurance companies have come in and are offering good plans.

At the end of the day, you can only do so much to protect your house. The forces of nature might be too much, but at least with insurance, you can rebuild promptly.

Get a good parking area

Parking between two large buildings can be a good thing and a bad thing. The good thing is that they can help weather the storm by blocking any strong wind. The bad thing is flying debris from the buildings can fall on the tiny house and cause damage. It is not advisable to park near a tree as it could fall and crush the tiny house. Park in a place accessible to the main road in case there is a need for emergency evacuation.

Weather is only bad if it catches you unprepared. With these measures put in place, it is easier to weather out storms in the comfort of your tiny house.

Read: Living in a Tiny House With Kids.. Pros, Cons and Everything You Need To Know 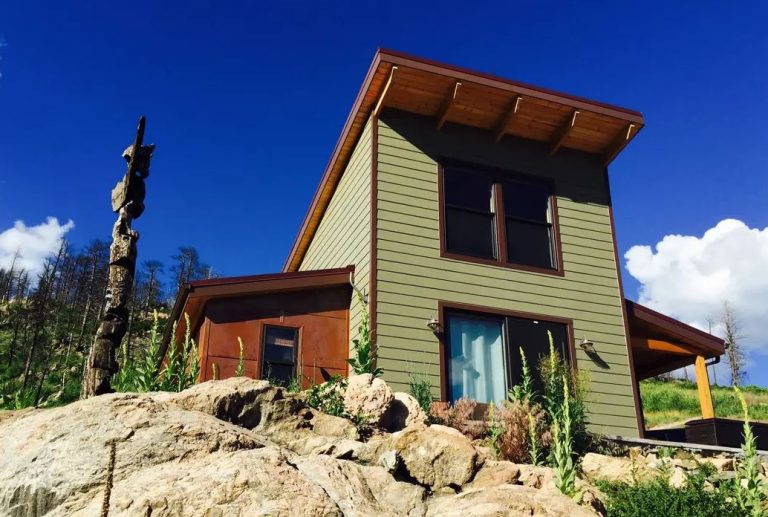 Is it Safe To Live in a Tiny House?